Just one book of Eileen Heming's (née Marsh) output (see elsewhere in this blog via labels) used the pseudonym E Malcolm Shard. This is Flying For Ethiopia,1936. My copy has green boards, 216 pages and four plates drawn by the ace aeroplane illustrator Howard Leigh (1910-1942) who also worked on Biggles books and the magazine Popular Flying. Its publisher imprint was The Popular Library, a book club, an original and not a reprint. Size 71/2 by 5 inches, thickness 13/4 inches owing to its thick card paper. Green boards were certainly a first impression (the book carries no dates but this is indicated by 1936 prize bookplates in one green copy for sale); there is also an impression with orange boards, maybe later or maybe contemporaneous.The title page says 'by the author of The Secret Aeroplane and The Rajah of Gungra, both by D E Marsh and also dating from 1936, published by Harrap, suggesting a Harrap involvement with this book club. "E M Shard" (without the Malcolm) is an anagram of D E Marsh. Eileen Marsh/Heming had no experience of flying herself, apart from a couple of lessons after this book was published. These were more than she could afford as each book paid her a pittance. She undoubtedly scoured publications like Popular Flying to get ideas, such as the planes in this book. Anyone with copies of this magazine please let me know! They are too expensive to buy.

An appraisal is offered by Eric Bates, Among Her Own People, pages 128f. Bates dates the book as 1937, but one for sale was awarded as a school prize in 1936. The (2nd) Italo-Ephiopian war, which saw Haile Selassie exiled to London, was from October 1935 to May 1936. The Claytons, heroes of the book, set off by amphibian to Addis Ababa via Malta around February, father and son Pip, to rescue Pip's uncle Bob.. The gung-ho tone of the book, which offers the Italians a very bloody nose and points out the dignity of the Ethiopian defence, was almost certainly written at that point, before the Italian 'victory'. The Claytons were well off and well connected, knowing Haile Selassie personally, one brother being Consul in Ethiopia, and having an airfield attached to their mansion home. On arrival in Ethiopia, Pip spots a 'Supermarine Fighter', a prototype, which he dubs The Fighting Ethiopian as he joins the Ethiopian air force in his father's absence. He joins a group of four aeroplanes who  massacre squadrons of Italian bombers, even stealing two during a daring rescue. I won't summarise the whole plot, just say that superboy Pip is not only a superb fighter pilot, but speaks both Amharic and two Ethiopian dialects, thanks to his uncles tuition, deaf and dumb sign language, and is a natural born killer.

On matters of detail, the Saro Cloud was a sizable amphibian/ seaplane with two engines on top of the wings, retractable wheels at the side for dry landings, and wing floats for sea landings. Introduced 1930, it was used for training purposes in RAF Calshot near Southampton. It is accurately described. It is an expensive plane to be in private ownership, although four were privately operated!

The 'Supermarine Fighter' is not the Spitfire and is depicted in a plate (left, initialled by Howard Leigh) as having cantilevered "gull" wings.It is the Supermarine Type 224, designed by R J Mitchell of Spitfire fame, with cantilevered wings (picture below), ceiling 38,800 feet, maximum speed 228 mph powered by a single RR Goshawk II liquid-cooled engine, and armed with 4 Vickers machine guns. Only one flew from 1934, and was found to be disappointing losing out in 1936 to the Gloster Gladiator for RAF orders. It  ended life in 1937 as a target on a firing range. However lessons learned from its design and performance led to the development of the Spitfire in the late 1930s. Another connection: Supermarine was established by Noel Pemberton Billing in 1913: one of the pilots in this book is called 'Billings'. 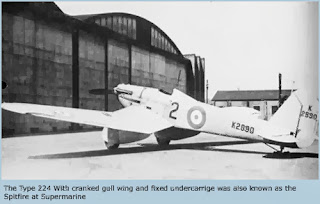 The representation of Ethiopians is curious. The 'native' is described as feckless, unreliable and without work discipline. 'Native'women (who had actually done an outstanding job and showed great common sense and fortitude, are described as of slow intelligence. However the royal family, including a boy of Pip's age, Makonnen, is depicted with great respect. In one official, Rastofarind, we can see the name Rastafari being drawn on, i.e. a follower of Haile Selassie. For the Italians, no respect is shown whatever.