Dorothy Carter is a pen-name of Eileen Heming nee Marsh, died 1948. See my earlier description of her work. Comrades of the Air from 1942 is one of her Marise stories. It is very difficult to obtain since it only had its initial print run, and some of that was bombed in store.  It is a pair with Sword of the Air which is similarly hard to find. Sword was an escapade in Nazi Germany; Comrades takes the story to Russia at the time of the Nazi invasion of Moscow. The dust-jacket illustrator (the same as the frontispiece picture of Katya and Marise) is by Newton Whittaker, an illustrator who worked on a range of books for your people such as by Pamela Brown and Nancy Breary. Any  reader with personal knowledge of this illustrator please leave a comment. Comrades measures 7 1/8 by 5 inches with 204 pages published by Collins (London and Glasgow). The rear of the dj advertises the contemporary  Holiday Books of Jane Shaw, the pre-war Farm School Books of Josephine Elder, and the New Abbey Series of Elsie Oxenham.

I have read many children's books from this period and Comrades is a good one. Some aspects might have seemed to be sheer anti-Nazi propaganda at the time but sadly have turned out to be true - the Nazis shooting POWs and hostages from villages, looting, sinking neutral ships, Gestapo brutality and so on. You only have to read the books of Helen Fry to find real incriminating evidence. Marise is in the ATA (Air Transport Auxiliary) as a aeroplane ferry pilot. The job she hustles for in this book is to ferry a plane to Russia because her best mates (male pilots) are going there. This is not a romantic plot, but rather 'I can do it if you can' feminism. As always I will try not to spoil the plot for new readers, but inevitably there will be very few new readers unless a reprint is arranged. It opens with a noisy party in Aldington, Kent, which is Eileen Marsh/Heming's home village (and appears almost as a signature in many books). 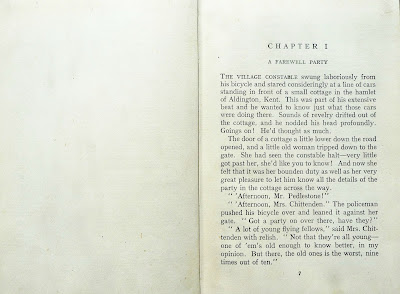 Apart from the usual Spitfires and Hurricanes, she mentions the (Westland) Whirlwind which served from 1940 but was obsolete by 1944. The author's high praise (p.11) was not warranted. Marise had also flown a 'Fortress' - a few Boeing B17 Flying Fortresses were owned by the RAF in 1941 (before America entered the war). But, as Marise said, we are talking too loud. In Russia Marise meets Katya Vanevska and her brother Ivan, also meeting up with her father who has a mysterious secret role in the war. In Sword of the Air, Marise met him in Germany in most unwise circumstances.  Russian women, the story explains, fly in combat - Katya was a gunner. Although excitable and a staunch Soviet and example of 'epic Russian heroism', the blurb says, Katya looked up to Marise on all occasions: Marise was apparently a natural leader. Unfortunately, a Nazi advance cut off their airfield, and a bombing raid seriously injured Marise's father. They needed to get aeroplanes away, and Marise was asked to fly the fourth bomber. An attack by Nazi fighters gave Marise her first 'kill' (two in fact); however her radio and compass were shot out and she lost touch with the other three planes. Looking for an airfield, which they never found, they ended without fuel at the White Sea, landed on the beach, only to discover that they were a short distance from a U-Boat refueling base. A U-Boat arrived, and torpedoed a neutral Swedish steamer - the captain's wife and child floated ashore on a lifeboat, and they became part of the escape party. Having whet your appetite, I won't give away how they escaped, were helped by a woodman who didn't know the Tzar had been overthrown,  were captured by the Nazis, escaped from there home again. Someone might republish the book - it is the best of the Marise titles. The pro-Russian sentiment is interesting, especially depicting the Russian people as suffering. The Nazis are depicted as violent, murderous and oppressive, as indeed they were.
Other old friends: Jim Grant, one-eyed hero of an earlier war and a Hollywood crash stuntman (see Star of the Air), Tony Arcoll and Jim Custance, fighter pilots who were loaned to Russia. Jim Grant said, "Give me my four-cannon Hurricane, thank you" (p.11). Every schoolboy knew that the Hurricane had 8 Browning machine guns, later increased to 12. That made me look up its service record. The Hurricane Mk IIC (introduced June 1941) replaced the machine-gun armament with four 20 mm (.79 in) Hispano Mk II cannons. DC is thus absolutely up to date, although Marise would have said, Hush, not too loud, walls have ears.
Posted by Stephen Bigger at 07:53