© Stephen Bigger.
Red-haired Coppernob Buckland (1925) is a doughty Boys Own Paper style story. Walter Buckland is in boarding school, about to go up to Oxbridge on a scholarship. After a false accusation, he is expelled and runs away to sea. I am not telling the blow-by-blow story, but in brief he does well as a first tripper, sails an abandoned boat single handed back to Southampton (has he drowned the captain should have been arrested for criminal negligence and manslaughter), finds a link to his bank manager father, gets involved with alcohol running into prohibition USA, is captured by pirates and finally solves the mystery so that a thief from his father's bank is arrested. Not bad for a teenager. By the end, he is no longer accused, has his scholarship, but decides on a sea career. A few points of interest in a story that is able to name and describe ports and sea journeys with apparent accuracy. It curiously starts at Lydney, a tiny port for carrying timber and coal up the Severn from the Forest of Dean, showing local knowledge. Despite accurate naming of destinations, his ship picks up barrels of whisky from an unnamed port on the Mull of Kintyre (actually, Campbelltown, and not a bad whisky). He clearly did not know the port's name in this case. The first three Coppernob books appeared as a Coppernob Omnibus in 1933 to accompany the fourth in the series. One later story was rejected by the publisher but still exists in manuscript.

A few examples of Bourne covers and dustjackets 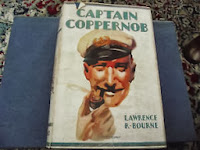 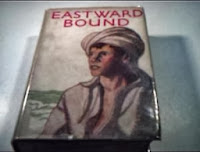 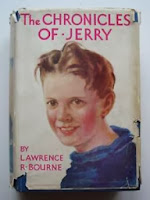 Stamped boards: the gold stamp will be a library stamp