Chance finds, bought together today in Cirencester were Jack Heming's Blue Wings (1938) and DE Marsh's The Airmen of the Island (1945). Since the dealer had bought them as a pair, his source must have known the connection, that they were husband and wife. Dorothy Eileen Marsh was the birthname of Mrs (Jack) Heming who used many pen-names. It started as a means of surviving the depression, a visit to London, and perhaps to WE Johns, told them that the future was in aeroplane stories for children. Jack tended to be more action-oriented and Eileen more relationship focused - although Eileen was fully capably or writing blood and thunder action stories, particularly using the Guy Dempster alias, war stories for boys. See my other blogs on this family via the labels. 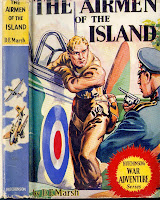 The Airmen of the Island  focuses on an Orkney teenager Rob Ker (age 17) who is master of a tiny island, Megg, who by saving a ditched Australian pilot early in the war found his way into flying with Coastal Command. The story featured Sunderland Flying Boats, introduced 1938. Germans take over Megg to fortify it and threaten Scapa Flow. Rob escapes to warn the RAF and a counter attack takes the island back, which then is fortified as an RAF base. But, the Germans take it over again... The first Nazis were callous and brutal; the second group were more polite (with "false politeness") - "you fought a good fight". The dead are accepted and not mourned. "Bill and Cleaver are gone" - "That's too bad"... "Let me gather our dead". The other planes at the base are Defiants, which are depicted as newer and deadlier than Spitfires. In fact they were not so. Built by Boulton and Paul, they had gun turrets rather than forward guns, so 109s soon realised that they could attack head-on with relative impunity. In the story, 3 Defiants were enough to knock out a flight of bombers and their attendant fighters. In real life, Defiants were put onto night-patrol duty, at which the excelled. The story also introduces an aircraft carrier and Navy forces, with Swordfish and Skua planes - the Fleet Air Arm, not so named in the book. This is a favorite topic in her Guy Dempster thrillers. One other detail, an occasional character is named Carter, probably Eileen's best known pen-name (Dorothy Carter). 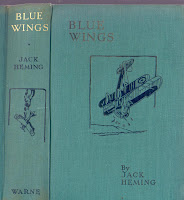 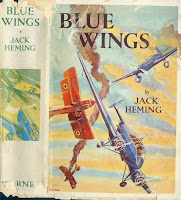 Jack wrote less, and paused as he joined the forces in 1939. His Blue Wings is uncomfortable reading, as four WW1 flying aces and one youth, Ray, fly to Spain to support the "nationalists" (Franco's fascist insurgents) against the elected socialist  ("communist") government who are depicted as Russian inspired, with a People's Committee to punish failure or opposition. Jack  was anti-communist rather than pro-fascist - their side are termed 'nationalist' and the government are seen as Russian invaders. At the end of unlikely and intrepid adventures in that blood-thirsty civil war, they returned home alive and joined the RAF.  De Havilland Dragons (biplane, built 1932) and Mew Gulls (1936) are the planes mentioned. The Percival Mew Gull was a single engined racing plane and only 6 were built, top speed over 250 mph - hot news in air racing when the story was being written. The back blue plane on the cover is a rough approximation, and the illustration on page 85. Why was one of these highly expensive machines owned by a youngster and based in a temporary county council airfield?  And then for a second to arrive there...  The illustration on page 197 is perhaps a biplane Dragon. The twin engined blue monoplane on the dustjacket is a Monospar (ST10 perhaps, picture below).

The red biplanes (make unidentified) belong to the Spanish socialist government and carry the Spanish roundel. In the story most are flown by Russians.


Jack's story does not in fact glorify war but gets young readers ready for a war that by 1937 was inevitable. WE Johns announced this constantly in Popular Flying, emphasising the need for the government to prepare. Ray entered the civil war for adventure, without any political ideals. He soon sees war as 'conscienceless'. Dogfights may be a game - a Russian ace comes down to give him some more petrol so they can carry on - but it is a deadly game, the objective to down planes and probably kill the pilot. The leaders of both sides drool with anger and solve problems by killing. War's horrors are hinted at, and war itself condemned subliminally but constantly. A boy needs skill and a level head to navitage through with higher ideals. They all end up joining the RAF preparing for the world war to counter aggression that is invariably coming.

Eileen unfortunately died early, in 1948, having brought up four children as well as writing 120 books. Jack later wrote after Eileen's death under her pen-names for a few volumes between 1948 and 1960.
Posted by Stephen Bigger at 14:00