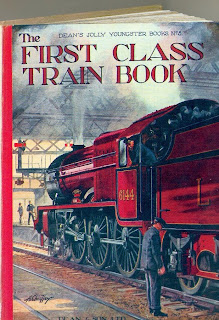 The cover of this Dean's Jolly Youngster Book, The First Class Train Book dates from 1931. The boiler shape of this Royal Scot makes it look more like a Patriot than the rebuilt Royal Scots we remember, but in fact the Patriot Class came later, from 1930. These engines were destined for the Euston-Glasgow expresses. The first 50 locomotives were built by the North British Locomotive Company, Glasgow in 1927 to plans devised down south, from 6100 Royal Scot to 6149, originally Lady of the Lake. Others were added in 1930, built elsewhere (especially Derby). The nameplate of 6144 cannot easily be read but was Ostrich. The first 24 of the class were named mainly after army regiments and by 1935-6, more regiment names were added, replacing the original names. By 1948, 6144 (which became 46144) carried the name The Honourable Artillery Company but there is a mystery: the 1944 Ian Allen loco-spotters British Locomotives ABC records it as having no name, the only unnamed locomotive of the class. Is this a typographical error, or has something strange happened? The engine was based at Liverpool Edge Hill (8A), rebuilt in 1945 with superheated tapered boiler, and scrapped in January 1964.
Posted by Stephen Bigger at 05:58