Josephine Blackstock (died 1956) was from Oak Park, Chicago, Illinois, where she made her name before and after the second world war in education, being director of parks and playgrounds 1921-1951. She therefore was interested in how children learn from experience.  American first editions are by Puttnams, Wings for Nikias with a foreword by Cimon Diamantopoulos, Minister of Greece and reissued after the war as a school text by EM Hale & Company of Eau Claire, Wisconsin. Both were issued in Britain by Hutchinsons, with Busoni's graphic illustrations in Island on the Beam replaced with tamer and more Anglicised pictures by R. Mills. Illustrations below are by Busoni. Blackstock wrote other educational texts after the war, mainly about famous lives. An extract from Nikias can be found in Youth replies, I can: stories of resistance, edited by May Lamberton Becker, Foreword by Elizabeth Morrow, illustrations by Warren Chappell (http://blacklight.betech.virginia.edu/catalog/u1302828).

Wings for Nikias: A Story of the Greece of Today, 1942
This is her first war book (written 1940,  drawings by Rafaello Busoni with vivid lines, dedicated to Percy Boynton, = Percy Holmes Boynton, Prof. of English at Chicago University , died 1956). The story tells of a very small Greek boy who worked for the resistance against the Nazi invader and was rewarded by an aeroplane trip, which furthered his dreams of becoming a pilot. The dedication suggests that she told the story before deciding to publish, so that Nikias might be based on a real person. The UK version was by Hutchinson, retaining Busoni’s illustrations.

Nikias is 10. He is friends with a shepherd who tells him stories of ancient Greek tales, interesting as a device because the shepherd, Demetrios is able yet poor, living in a home-made tent, though with plans for marriage and something more permanent. The tale of Perseus results in Nikias dressing up with winged shoes in a carnival, Demetrios making him a toy plane, and then seeing a real plane go over, a rare sight there. In the background, war threatens.
The war erupts. An invading army takes over, and Demetrios joins the resistance army. Even the youngsters have to be alert. Nikias meets the invaders and realises that thie questions might give away Demetrios’s position. So he lies, and rushes to find the resistance forces and warn them. His prompt action results in a stirring victory for the resitance over the invaders. As a reward, he gets his flight in an aeroplane.

Review by The Chicago Tribune, of Wings for Nikias, cover flap of Island on the Beam::
"This charming story can hardly fail to accomplish three services for boy and girl readers: encourage bravery, heighten an already lively interest in aviation, and restore the shining traditions of ancient Greece. Mrs Blackstock's intimate knowledge of children - she is the director of playgrounds in Oak Park, Illinois - does not find its sole vent in practical psychology. She is a versitile writer, a born storyteller and a teacher of great skill..." 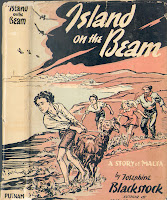 Dedicated this time “for Edith”, this story is about Malta, that crucial base which defended Mediterranean shipping and was intensely bombed. It is illustrated again by Rafaello Busoni. My English edition is by Hutchinson, in the Stories for Young People series, and dates to 1948. The illustrations have been replaced with more English but less lively drawings by R. Mills. The originals are graphic, with fighters straffing the streets and one character killed by a bomb. This was probably felt to be too graphic for English children who had experienced it, as American children had not. 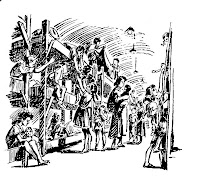 The story opens with a harmonious friendship between British and Maltese children and their families. The governor was General Dobbie, really Lieutenant-General Sir William George Shedden Dobbie GCMG, KCB, DSO (12 July 1879 – 3 October 1964), who had served in the Boer War and the First World War, and was the uncle of Orde Wingate who organised the Chindits behind Japanese lines in Burma and was killed in 1944. Both can be found in Charlton Cemetery. Dobbie (Old Dob-Dob in the book) was only 60 in 1939, when he was retired after governing Malaya for six years; but he persuaded Edmund Ironside that he had more to contribute and was sent as Governor-General of Malta till May 1942. He was replaced by the Anglo-Irish Lord Gort (Field Marshal John Standish Surtees Prendergast Vereker, 6th Viscount Gort VC, GCB, CBE, DSO & Two Bars, MVO, MC (10 July 1886 - 31 March 1946), hero (perhaps) of the BEF in France, builder of a new and vital airstrip on Gibraltar, who served in Malta from May 1942 until 26 September 1944. He appears in the book as a zealous reforming figure, suggesting that Dobbie might have needed replacing.

The statue of Queen Victoria (‘Old Ma’) punctuates the story, surviving air attacks. Malta is part of a benevolent British Empire. The book caricatures national types. David is English, an intrepid pilot (officer pilot rather than sergeant pilot) of unbelievable luck, who loves polo. Sandy is Scottish, full of och the noo and porridge. Bob is American, brash and brazen, full of unintelligible slang, and linked throughout the story to convoys that do not get through. They all get on well, and Sandy marries the Maltese Tessa and twins are born. The Maltese children are Pietru (12) and younger Geckos who is obsessed with animals. John is Pietru’s age and friend, and sister Iris is Geckos’ friend. All goes well until a relative, Beppo, of Sicilian (Italian) birth stirred up trouble, caused a breakdown in their friendship for a while, and tried to steal a military secret. John is too full of his Englishness and imperialism (only an American could comment), and further annoyed when Pietru lost him a donkey race (Beppo had pushed him). Nevertheless, Beppo failed and escaped back to Italy. Uncle Umberto, Beppo’s relative, was anti-British at first, especially under Beppo’s influence, but apologised and made good. He is killed in the end saving Iris from a German bomb. Beppo represents the fifth column, the enemy voice from within; Umberto is a reminder that not all aliens are enemies.

The story has a chronology. The first part is 1940, early in the war when only the four Gladiator biplanes defended the island. When three are left, they are nicknamed Faith, Hope and Charity. David flies Faith; and faith is a theme of the book. The detail of this period is sparse, and the Gladiators are not well described. (The picture of page 129 is actually of a Hurricane).  They were described more heroically after the war. Later in the book, Tessa had married Sandy, twins were born and Pietru was 14 – we are now in 1942-3 and Lord Gort was Governor. David is flying hurricanes (Mosquitos arrived 1943-4), but again without detail – only the strategy of flying high and swooping down.

Bob is to me a significant character, an American, with Chicago often mentioned. The guns are Chicago Pianos, as they were made in Chicago (lease lend). The children write to him, he meets their families and provides treats, his slang is mimicked. The author, teaching children in the Chicago area, has introduced into her story probably her major source, a friend who regaled her with stories of his wartime travels. Within the war, it allowed her pupils to get a feel of the human cost, and heroism, of war. The leverage to get them published gave first American then British readers a window into war in distant countries.

Jacket of British edition, 1948.
The book ends problematically. Historically, the biplane Gloster Gladiators, probably six or more, including Faith, Hope and Charity, saved the day against extraordinary odds until the hurricanes were delivered by the convoys. That was a real David and Goliath story. However, in this book, there are Hurricanes and Wellingtons available, yet David chose to fly in an elderly Gladiator, a fighter not a bomber, to bomb the Italian post and airfield that was threatening Malta. That was crazy, when (apparently) a Wellington was already fuelled and bombed up. He gets shot down in the sea, saved only by his inflatable jacket and Pietru miraculously finds him. Tension is created at the expense of realism. The given top-speed is accurate though, 250 mph or so. The danger finally receded as Rommel was defeated in Africa and the allies won back control of the Mediterranean. Actually, Spitfire Vs, Beaufighters and Blenheims were stationed on the island, some from the Carrier HMS Eagle.

As a postscript, HMSO produced a booklet on the Siege of Malta as part of its effort to keep the population informed about the war. I have described this elsewhere since, although anonymous in authorship, it was actually written by the poet John Pudney who was a writer in residence serving in the Mediterranean theatre. This account of the struggle against inhuman political policies is an example for us all to continue the struggle to achieve ethical governance.
See also:
The story of Rafaello Busoni and his wife Hannah, Jewish refugees from Germany to New York in 1939 - http://www.archive.org/details/hannahbusoni2
Alan Machin's personal story:
http://alanmachinwork.net/Hunting-the-Gladiator-and-the-Gecko 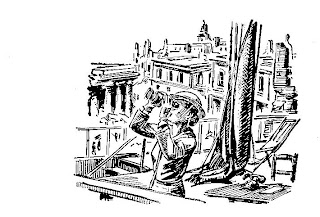 Thanks to Alan Machin for this and the conversation about "on the beam" which in air force slang means finding and sticking to the beams which assists navigation and landing. A relative, Wilf Slack, was i/c a number of coastal radar stations which used Gee and Oboe to get planes to target and home again. As night and daytime raids increased, night and fog landings became matters of great concern. All were of course top secret, but the slang "on the beam" began to be used. Germany also had a beam, Knickelbein, which Allied boffins succeeded in (metaphorically) "bending" sending German planes off target. My problem with this explanation for our title is the date of writing, 1943. Nevil Shute's Pastorale (1944), written by a flying expert who founded the aeroplane manufacturer Airspeed and built planes for the war government, tells of a Wellington bomber pilot finding his way home with a mutilated plane. We get a detailed description of the flight home and the landing, including the radio conversation. No beams are mentioned, anywhere.  The beams may just have been in use, but without sufficient time for the slang to have developed and crossed to Chicago to be recognised by street kids. The phrase is clearly fully understandable by the author's Chicago audience, without need for explanation that might help us. In my copy of the American edition, the author writes 'To Della -whose friendship I have always found to be "on the beam"'. Full of sunshine and happiness. The beam was black slang for sunshine (Cassell's Dictionary of Slang). 'On the (sun)beam'. In the American version, Pietro sees how beautiful the island is, and says 'The island on the beam!". The happy sunshine isle. The illustrator Raphaello Busoni adds a little vignette - seven children in a Maltese boat, waving, with the island behind them bathed in sunshine. So then, if "on the beam!" is already American slang for sunshine and happiness, how fitting for it to be applied by Flying Fortress crews to getting home safely, especially where they are assisted by a navigation beam. 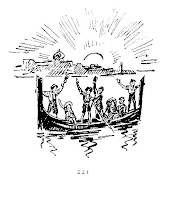